Flood takes away under construction bridge 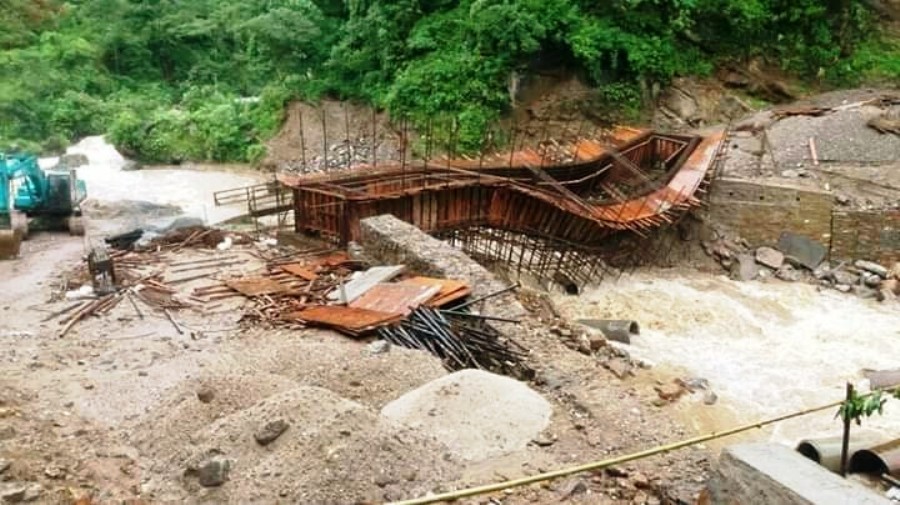 Nawalpur. The swollen Baudikhola (rivulet) of Nawalparasi (Bardaghat-Susta East) took away a bridge being constructed in Baudikali.

Slab and beam of the under-construction bridge linking ward 1 and 2 of Baudikali rural municipality were swept away by the flood that took place after incessant rain since Monday evening.

Chief Administrative Officer of Baudikali rural municipality, Pradeep Chandra Subedi informed that the flood-fed rivulet took away the iron skeleton of the Shera-based Bridge which is to connect the rural municipality with district headquarters, Kawaswoti.

The tasks of bridge being constructed with Gandaki Province Government’s investment of Rs 35 million had come to the final stage.

According to Officer Subedi, the significant task of the bridge construction was planned for today. Loss worth amounting to tens of thousands has so far incurred with the flood taking away the under-construction bridge parts, Subedi added.

Meanwhile, a motorable bridge connecting Nawalpur and Tanahun is reeling under a vulnerable condition due to unprecedented flood in the Kaligandaki River after torrential rainfall.

Vehicular movement has been banded in the area after the bridge sliding into a risk, Subedi shared. (RSS)