The dual role of the President in the cabinet reshuffle : Oli denied to Deuba 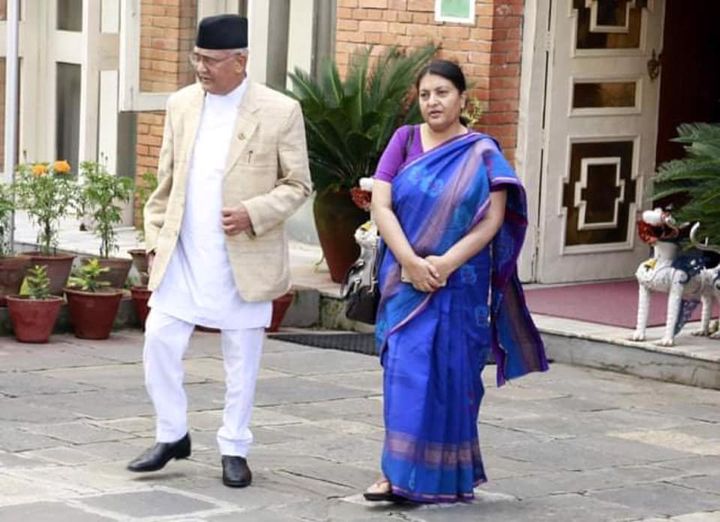 The oath of office was administered by Prime Minister KP Oli on May 6 and 7. Less than three weeks later, the Supreme Court dismissed the expanded cabinet as unconstitutional. As it turned out, only five people, including the PM, remained in the 25-member cabinet.

The PM was accused by the court of being arbitrary and of playing a double role in the work of the same nature towards the nation.

Oli would not have been tarnished in history if the President had stopped the PM from doing such a thing after the dissolution of the parliament and the announcement of the election. Earlier, there was an example of Sher Bahadur Deuba being stopped from expanding the Council of Ministers in a similar situation. But this time, when the PM was given such a waiver, it was the PM who fell in love with him.

Chief Justice Cholendra Shamsher Jabra and Dr. Prakash Dhungana’s joint sitting rejected the expansion of the Council of Ministers as unconstitutional. Since then, Oli’s cabinet has been limited to five members, prompting the PM to respond by saying he could not run the government. This has also exposed the dual character of the President.

While the issue was being debated in the court, senior advocate Dinesh Tripathi, a writ petitioner, said that it was the incumbent President Vidya Bhandari who had blocked the election government of Sher Bahadur Deuba in the first term. Ram Baran Yadav had also blocked the expansion of the then Baburam Bhattarai government. Therefore, the current cabinet expansion is illegal and contrary to the precedent and the court took it as a precedent without saying that it should be repealed.

This incident of Deuba period is around 2074 BS. At that time, there was a government of Nepali Congress and CPN-Maoist Center (MAC). However, the CPN (Maoist) entered into an alliance with the CPN (UML) on September 3 of that year. Then in October, Sher Bahadur Deuba released the CPN-Maoist minister from departmental responsibilities.

After that, an attempt was made to expand it in the Council of Ministers, but it was the President who stopped the election government from doing so. According to one of the ministers at the time, Sher Bahadur Deuba ji had consulted with the President to give the responsibility to a new person after he was stripped of his ministry post. However, the president has advised that the cabinet should not be expanded in an elected government. This is what Sher Bahadur ji told us. There is no written correspondence with the President, it is a verbal matter.

If the CPN (Maoist) withdrew its vote of confidence, the government would be in the minority and the election would be affected. Therefore, the CPN (Maoist) did not withdraw its support to the government. However, when the leaders of the parties allied with the opposition were in charge of the ministry, including the home ministry, the risk of misusing the election increased, PM Sher Bahadur Deuba relieved them of their departmental responsibilities and consulted with the president to keep some of his people in those ministries. But when the president said no, he stopped.

As a result, ministries, including the home ministry, were headed by a secretary at the time. In terms of elections, the situation is the same as it is now. Only people are different. When people were different, when the President tried to follow two different views on the same issue, not only the individual but also the institution itself became infamous.

The dual role of the President in the cabinet reshuffle : Oli denied to Deuba